Part four of the book The cashless conspiracy by Cash Only. 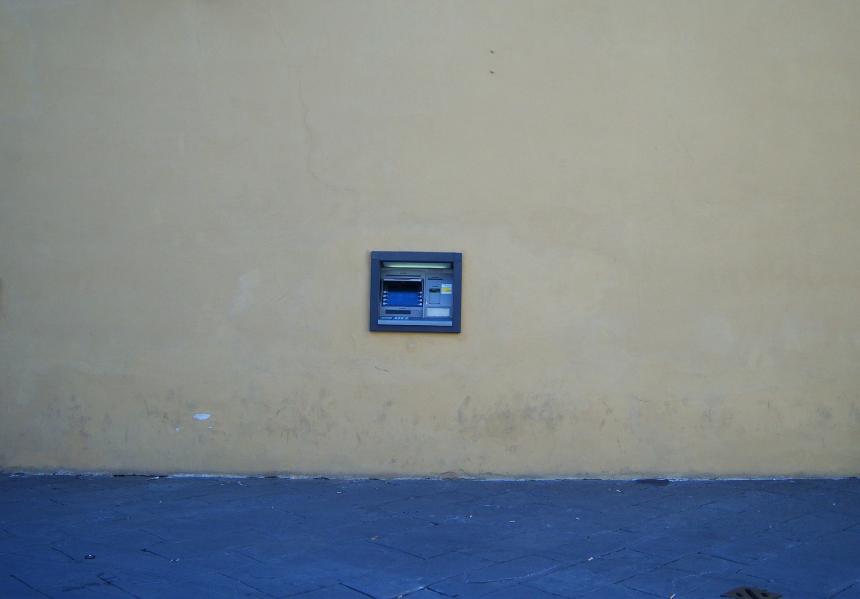 The statistics of ATMs in Sweden is highly contradictory. Swedes make most withdrawals in ATMs in Europe. It's about a lot more cash. A previous study spoke of 11,000 withdrawals per machine in Sweden, compared with just under 3400 of the European average.

ATM in Sweden is actually a brand name, and the general concept of the ATM. ATMs are a step in the cashless direction even though they physically have the cash to do. They replace withdrawing money in the bank. The trend has long been toward a compulsion to use a credit card to withdraw money in the vending machine. The clean withdrawal cards or ATM cards are not given any longer by the banks. Bank customers are then forced into the cashless system surreptitiously. Even those who do not use credit cards for purchases, but uses the ATM machine to withdraw cash.

Theoretically, the machines shut down at any time, and people are forced to deal with the cards. Machine users already have a credit card in his hand, which is used as "cash card". ATMs are really so negative that even in Sweden should start using some English-speaking countries slightly disparaging term "a hole in the wall" (a hole in the wall) on the machine. Who has not heard people complain that some ATMs have withdrawal fee and some do not. These little annoying fees are just the very tip of the iceberg. Beneath the surface is all ATMs on the sly manipulation of cashless direction.

Parliament has given the County Board mission to ensure that basic financial services which also include ATMs. It is this board that really have the responsibility to be installed ATMs in places where the machine does not exist at all. Some initiatives of the County Administrative Board that such contact ATM AB has reportedly never been. Probably it is still so. Since ATMs are negative, they should instead ensure that the population has access to full banking services in banking. But the whole thing is still clear that policy and the state often leaving citizens adrift to the banks' discretion.

The statistics of ATMs in Sweden is highly contradictory. Swedes make most withdrawals in ATMs in Europe. It's about a lot more cash. A previous study spoke of 11,000 withdrawals per machine in Sweden, compared with just under 3400 of the European average. Meanwhile, there are in this country, the relatively low number of machines based on the proportion of ATMs per person second to the Czech Republic. Half compared to the rest of Europe. The removal of ATMs in Sweden often justified they used little and is unprofitable. Although I, for various reasons are strongly opposed to the ATM, you have to also point out the silliness of the argument. Should perhaps also some fire stations, police stations and hospitals closed down because they used "too seldom" serious fires,

The total value of the part of the machines has remained fairly constant throughout the 2000s. The machines are often inconveniently located and the large bank-owned ATMs are relatively old. It's scary enough banks themselves entirely determines how many machines it should be. To talk to a friendly person at a bank counter instead of taking out the machine should never be seen as old-fashioned. Why not go back to the terminal in the bank now that many ATMs are getting old? The question is rather pointless to ask for a bank.

The big banks will not invest further in new ATMs. Their machines are therefore quite outdated. The private banking independent Kontanten contrast, modern high-tech machines. More about this company soon. It can be concluded that the banks are even more so going to let outside companies taking care of the machines and / or iced expect the ATMs relatively soon will disappear. When banks let go, and the responsibility for automatic operation of the external companies that smoothed the way for more serious offenses on a par with Panaxia scandal where executives from the company itself committed crimes.

The more ATM use, the less the corresponding activity in the bank. It was so that it was the introduction of ATMs that made the worldwide spread of credit cards really took off. This began to happen as far back as the 70th century. There have been a credit card company also has been dealing with a worldwide network of ATMs. This has been the case with Visa. Shown network was often seen with disapproval by the banks because they had their own network of ATMs.

A sort of precursor to the ATM machine (called Bankograph) was constructed by Luther George Simjian the City Bank of New York's behalf. It was introduced in the early 60th century but was removed after six months. The development was then in parallel in different countries. Among other things, with the help of the Scots John Shepherd -Barron (company De La Rue) and James Goodfellow and American

When the first Swedish machine was demonstrated in 1967 did not sedelutmatningen. You had to poke banknotes manually bill slot instead. The data communication to the earlier machines in Sweden administered including the 1962 founded Spadab (Savings Banks Data Processing Center). In the ATM childhood used punch cards as ATM cards and ATM rang up the bank at each outlet.

The savings banks' ATMs were first used in 1977 was previously called Minute. First of all, called the Mini Banks and were mostly designed by Ingmar Lundberg and Hans Olof Andersson. In response began, most commercial banks with ATMs. Internationally, the ATM industry, a joint organization called Atmia (ATM Industry Association).

ATM AB is a relatively new company in order to collect all ATM operations "under one roof". It was formed by the four in Sweden earlier operative banks and the extra cash to solve financial abnormality known as Danske Bank. The predecessor was called Bank Machine Company (BAB). The company Loomis manages now all those ATMs which goes by the brand ATM. The whole operation is then in the hands of a single company. I strongly suspect that the formation of this company was a long-term step in the plan to remove the ATMs completely. In plain Swedish bundle up and kill.

Later came even ATM Kontanten. Kontanten became the first independent vending machine operator. This private company was founded in 2003 and cooperates with other companies Panaxia, Loomis, Visa, MasterCard and Wincor Nixdorf. In just over 10 years increased Kontanten ATMs around 600 pieces. They are often in such malls and department stores.

There are companies Loomis and G4S have been responsible for the operation of banks' ATMs while Panaxia held similar responsibilities for the bank independent Cash dispensers. 2014 was bought Kontanten up of security Nokas. It had to do with a deal when Kontanten was under reconstruction and Nokas the largest creditors demanded to take over the company. Creditors largely agreed to write off the debt by 75 percent.

One of Sweden relatively new variant of the machine is inserting machine. It was at a time around two hundred deposit machines in Sweden. There is no completely current figure. With deposit machines do not even want people to get hold of the money they already have, but they should be put into a machine. These machines are compared with the pure ATMs relatively difficult to use. The first bank to be let outside company take care of the ATMs were Skandia Bank. Even the exchange of currencies has largely been taken over by companies other than banks. No reduction in withdrawals in automatic has been seen, but the transfer has thus to a large extent been made at Kontanten machines.

Cash should be solid state. The state has in Sweden the original debt since it deregulated and allowed the privatization of cash management. Now banks dislodged cash operations to independent private companies, it becomes like a dinghy for a sailboat. When the bank sailboat think it's time for it to simply unleash the independent cash dinghy and leave it to its fate after first hole drilled in the hull. In the leaky skiff sits cash users with mouths gaping in surprise as the sun frying their faces.

Important Swedish manufacturer of ATMs has been Metior and Ericsson. Metior founded by Securitas and Tetra Pak. Ericsson had a close cooperation with the Japanese company Omron.

ATMs usually have been linked to bank excess network. The first working offline. This means that they had continuous contact with the bank. The world's first cash machine which instead worked Online installed in Malmö in 1968. The software was running earlier operating system, Microsoft's DOS and IBM's OS / 2 until later went over to Microsoft Windows.

The computer technology of clarity in this book because it is as much written for those who do not know anything about computers. An operating system is the basic software that can be added to a blank computer or other computer equipment. Often operating there from the beginning. It is necessary to be able to run other programs and perform basic computer activities. The Linux operating system is also used to some extent in ATMs. It is also used in very powerful computers, for example, may have to kontantlöshet to do.

Three of the largest manufacturers of ATMs in the world has been the American Diebold and NCR and German Wincor Nixdorf. Diebold was founded in 1859 by Charles Diebold and made first safes and vaults. From the 30th century onwards expanded with other products. In the early 70s, started to manufacture ATMs. For a few years in the '90s had a partnership with IBM, called the Inter Bold to sell ATMs outside the US.

and the Republican Party campaigns. Diebold made for longer electronic system for political elections. The company and one or two of its executives have been involved in various scandals.

The company NCR had before it more descriptive name National Cash Register. It was after the foundation in 1884 for a long time in the city of Dayton in Ohio. For out of the main manufacturing of ATMs has production done by including cash registers, computers and bar code scanners, the German company Nixdorf Computer was founded by Heinz Nixdorf in 1952. It was acquired by Siemens but was sold to two investors in 1999 when it was renamed Wincor Nixdorf.

Withdrawal of the machine is actually a range of everyday little annoyances. From the sun shines on the computer screen to male individuals with large hands can not reach the keyboard, because the protective plates to prevent people see the numbers that hardly too tight. Really tall people often stand strongly bent to get under the awning or get sun screen. If you forget the card in the machine sucked in many cases into it.

It is unlike to get into a cool and moderately light local bank and receive money from a regular bank person. Have at least not so far experienced the eyes of the banker or bank the woman behind the counter of the bank blinked red and mouth robot preferable repeat the word error error (error error).

ATMs are often inaccessible to wheelchair users. There may be Braille buttons and there are even talking ATMs but it works badly and is impractical. The button with the five may have a raised mark but then users can still remember exactly how the numbers and buttons are located. The various buttons are different on different types of machines and often is not enough orientation marks on them. Often it is just talk button that has Braille. Machine manufacturer Diebold has developed the Talking ATM Opteva where the company ScanSoft has developed the appealing program. But because of security reasons, the visually impaired have their own headphones.

ATMs are slightly negative despite the fall out cash from them. It's the same as with the foreign credit cards are also additional negative to the manufacturing of ATMs takes place abroad. That does not mean completely Swedish ATMs were positive. Only slightly less negative.