Prophecy: "As the elections in Israel, but no government is formed near the coming of the Messiah"

How is the situation now in Israel. 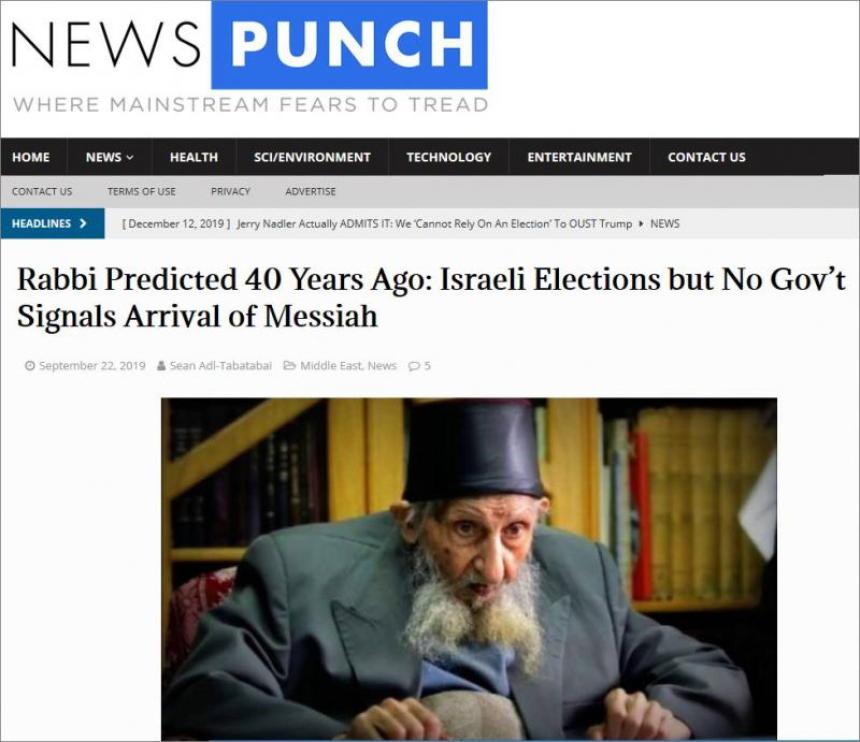 It is the first time in Israel's history that it has been unable to form a government. In addition, the image that Israel had two choices this year, but it led to a government.

There is a 40-year-old prophecy that can now be linked to the current situation in Israel.

The prophecy comes from Rabbi Yitzhak Kaduri was a remarkable man see photo above. Not only because he was 108 years when he died in 2006.

He was a highly esteemed, learned and loved teacher for many Jews. That was the case, it gives good number of those who followed his funeral procession was followed by about 300,000 and Jerusalem was covered by posters that proclaimed mourning for the late Rabbi Yitzhak Kaduri.

His lifestyle was very simple. He lived a life of poverty, he ate little, talked and rarely spoke. Despite this, he won many people's ears, when he performed something.

He spoke rarely, but when he did it was written down what he said. 40 years ago, they asked him how Messiah is seen in the practical politics of Israel, or seen it there? His answer was short:

"As the elections in Israel, but no government is formed near the coming of the Messiah."

How is the situation now in Israel. It is the first time in Israel's history that it has been unable to form a government. In addition, the image that Israel had two choices this year, but it led to a government.

Do not despise prophecies

Of course, all the prophecies examined but they should not be despised, it says this short verse:

It really is time to realize that Jesus can come at any time! We can not be silent in this remarkable prophecy. Now it is rather the responsibility of the person who reads the message of how to react.

Many will reject this and defend themselves against it. All sorts of arguments against this will surely come.

It is in this area in the Swedish Christianity a great lack of understanding of the prophetic course of events at hand, why do not talk about Jesus' return.

Jesus predicted that many instead have a negative attitude towards the message of Jesus' return and believes that this can not happen now. This is serious for Jesus calls such a servant of evil!

Here you can try yourself in relation to these words of Jesus if it is what Jesus says, an evil servant.

It is not we who claim that without Jesus. This is not written to condemn the servant of the Lord without once again in love trying to bring to responsibility and restraint.

You are not saved or live a false life, feel free to get in touch with us so we conversed at. It is now not to push on to take decisive steps, it can always be late!